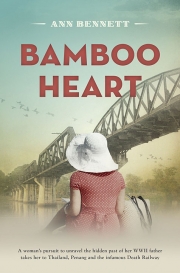 Welcome to my first post on a new regular blog about my writing.

I’m getting ready for the upcoming UK launch of my novel Bamboo Heart, published by Monsoon Books and have been thinking back to what first inspired me to write the book. It is the story of Tom, a British soldier during world war II who is captured by the Japanese at the fall of Singapore and sent to work on the Thai-Burma railway. Decades later his daughter Laura travels there to try to try to piece together what happened to him during the war.

The seeds of the idea were sown over twenty five years ago when I first went to visit the River Kwai and the death railway with my mother. I had grown up knowing that my dad had been a prisoner there during the war and that he’d never recovered physically from the experience. Dad died when I was seven, and the urge to find out about his wartime experience grew stronger as I grew older. When I was in my twenties I decided to go to Thailand to discover as much as I could for myself.

It was not easy then to find information out about what happened to individual prisoners, and I don’t think their records were available in the National Archives as they are now.  But Mum and I travelled to Kanchanaburi, stayed in a bamboo hut right on the river and saw as much as we could of the railway, the bridge on the river Kwai and the only museum that was there at the time – the JEATH museum. It was not an easy experience for either of us, especially for Mum – she was of the generation that wanted to forget.

During that trip I kept a diary, and that has been the source of inspiration for quite a few of the scenes in the book.Here is a link to my website page of some of the pictures I took then. Over the next few posts I’m going to add my diary entries too, and post further instalments about the ideas behind Bamboo Heart.

One thought on “Inspirations for Bamboo Heart – Part 1: Beginnings”